How elusive? VERY. This classic rarity in United States Currency is highly sought after and rarely sold. Anytime one comes up for auction, it immediately makes headlines, inspiring awe and wonder in those lucky enough to see it. For those that have the bankroll to buy one, well, they would feel “ecstatic”, but that word isn’t quite good enough to properly define the feeling.

As it turns out, PaperMoneyAuction.com currently has one Fr. 1133 1918 $1000 Federal Reserve Note for sale, offered by Jhon E. Cash – Click Here, a noted high denomination collector and dealer. At $52,500 this one may seem like a bit pricey but actually is a very good buy given the rarity and condition of the note: Cash’s note is a very respectable Extremely Fine example. So where are all the New/Gem examples of this note, and who might have them? That’s actually not very clear. Apparently, some examples of this note in higher grades have made their ways overseas, not making it likely that they’ll appear back on US shores soon. (…You never know, however…)

The last time anything approaching Gem came up for sale (publicly) that we can find was the 2008 Heritage Long Beach California Auction, during which a PCGS PPQ 64 Very Choice New hammered at $97,750. As indicated on the PCGS jacket, the note is from the Rickey Collection, although it traded hands a couple times before landing in the Taylor Family Collection.

There are only 4 known Cleveland 1918 $1000 Federal Reserve notes, which definitely helped amplify the price of this example.

Don’t worry: if you’re dying to have one but don’t have $100,000 to spare, there are notes for sale now at reasonable prices. GroveCoin.com is selling one right now with a solid Very Fine grade: Not to be outdone, Hokanson-Coins.com has its own $1000 FRN up for grabs, with a PCGS 20 Very Fine grade: CertifiedAssets.com also lists a Fr. 1133 from Chicago, graded Very Fine 35 by PCGS. This example is a bit nicer than Hokanson’s note, and perfect for collectors who enjoy collecting high denomination notes from the Chicago district (*Important: This note is listed as for sale on the CertifiedAssets.com website, although the individual page listing it is dated 2009 – contact the website for further information):

So there you have it: Super rare, Super Cool, and Super expensive 1918 $1000 Federal Reserve Notes that would make the perfect centerpiece to any collection.

One other thing to remember: Fr. note 1133a with Burke-Houston signatures and Fr. note 1133b with White-Mellon signatures are even rarer, hardly ever seen in recent memory. Getting one example of all three signature combinations would be a very expensive and protracted process. Be prepared to wait for the mega-collections of today’s USA currency lovers to make it to auction before you even dream of owning these notes.

One of the more ubiquitous large size notes to collect is the $1 Legal Tender Note. Unlike its $1 Federal Reserve Note cousin, however, the $1 Legal Tender Note comes in a number of different varieties, signature combinations, and seal colors. In fact, assembling a complete collection of $1 Legal Tender notes ranging from their initial issue in 1869 to 1923 in uncirculated or better condition would be both fairly challenging and expensive.

If you’re not as picky about rarity or condition, this note is affordable in Very Fine to Extremely Fine condition, if you’re willing to be patient and hunt around for a good deal.

The first issue of $1 Legal Tenders in 1869 is known as the “Rainbow Note”, for its multiple colors: black, red, green, and blue tint on the upper portion of the note to discourage counterfeiters. The notes we’re featuring today are both Friedberg 36, $1 1917 Legal Tenders with small red seals and Teehee-Burke signatures. This is one of the more common notes among the collecting community. It’s important to remember that as the condition of the note improves, so does its price. Consider the following notes.

Check out these samples, the first from Florida Calls Currency: 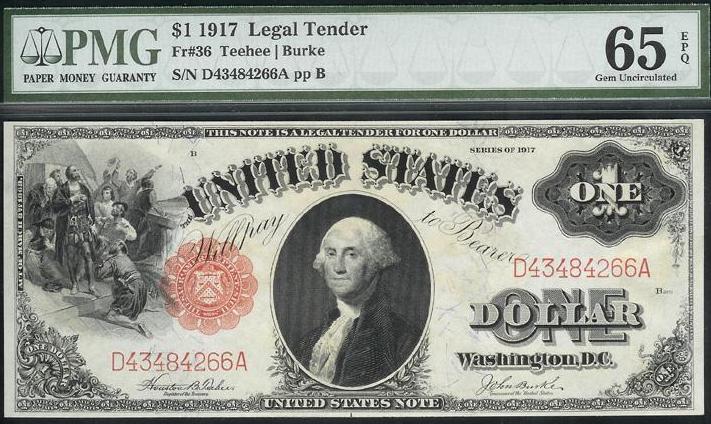 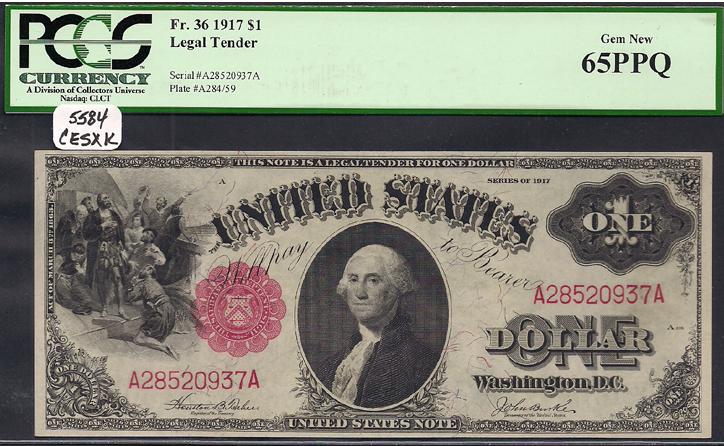 Comments are open…Who win’s this “Battle of the Bank Notes”?